Grafton Childcare
So we have in no particular order ……
Phil Tupman – Denise’s long suffering husband for the past 32 years and Daddy to their four adult sons, Matt, Chris, Jonty and  Andy and Granddad to William and Albert. Phil is Grafton’s Cook, Caretaker and head of transport, since Denise does not drive, although she does own a rather fetching Lilac Morris Traveller Estate which you may see Phil and her driving around in.


Not only does he cook all of the meals freshly each day for the nursery he also cooks for the Tupman family daily as well. When he’s not cooking for us, he can often be found with a drill or screwdriver in hand repairing or mending something for Denise, from one of her very many lists stuck on the Fridge!


In his spare time Phil enjoys looking after his avery full of Finches and Canaries and taking our  Miniature Dachshunds Schnitzel von Krumm, Strudel von Hund and Pretzel von Biscuit for long walks, although they never seem long enough to wear them out! Chris Tupman – always has a smile on his face and joined the family firm in October 2006, he gained his Level 3 Diploma in 2012 and works mostly with the over two’s or wherever his many talents are needed. Chris is also one of our 1st Aiders.


In his spare time Chris enjoys off road cycling and restoring a vintage Mini Clubman Estate. Lara Rowe – joined Grafton in September 2011 as a level 3 Apprentice having completed her level 2 in Childcare the previous year at Newton Abbot College.


Lara now works for Grafton full-time and is our Senior Nursery Nurse with our 3 & 4 Year olds and our setting SENCO, she has a lovely gentle nurturing nature and is a brilliant addition to the team here at Grafton.


All of Lara's spare time is taken up looking after her pet Pug.

Natasha Dempsey - joined the team in September 2016 from Puffins of Exeter. She gained her Level 3 Diploma in Child Care and Education in 2009 and has worked full-time with children for over nine years, so joins Grafton with a wealth of experiaince and some wonderful ideas. 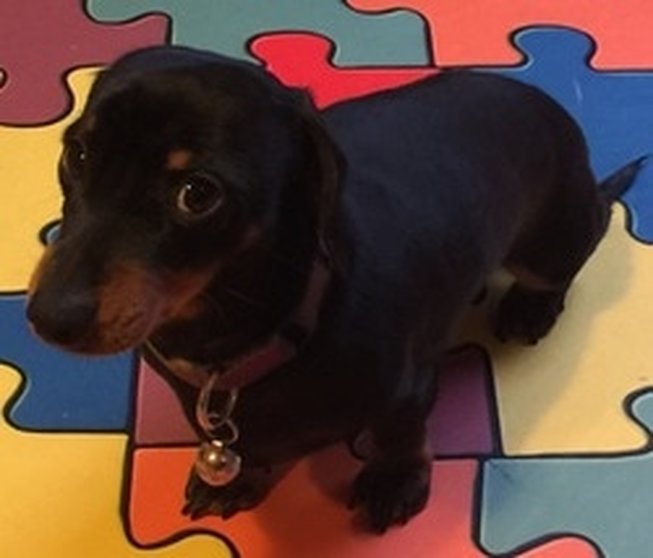 Schnitzel von Krumm - joined our staff team in September 2014, the photo was taken a few days before his 1st Birthday in June 2015, so as you can see he's a fine figure of a black and tan Smooth Haired Miniature Dachshund.

Pretzel von Biscuit - joined us in August 2016, he's a beautiful chocolate and tan, Smooth Haired Miniature Dachshund and he completes our Dachshund pack.

Schnitzel, Strudel and Pretzel all live and work on the premises, they are in charge of night time security a position they take very very seriously they will sit at the lounge window of an evening watching the cars coming and going up and down and barking if they thinks they are going a bit fast or if they spot somebody on their mobile!

Then once we are off to bed they are under the duvets as quick as a flash and will let us know when our neighbours and family arrive home for the evening and won't settle until all of the family are home and in bed.


During the day they can be found either asleep in their gated Kennel area outside the kitchen or at the side of Phil or Denise as they are working. They love the children to bits and are always very interested to hear about their stories, they are such good listeners even if they have told them the same tale many times before.


During their spare time they enjoy sleeping, long walks around Decoy County Park and sleeping some more!